Immigration has been an important topic in Britain since the end of World War Two, yet very few films looked closely at the topic until the 1980s. In that decade the director, Stephen Frears, made a film about the immigrant experience in London (My Beautiful Laundrette in 1985), but Dirty Pretty Things goes far deeper into the circumstances of legal and illegal immigrants working in ‘dirty’ jobs in the city. The script was written by Steven Knight, who first came to notice as one of the three creators of the TV series Who wants to be a millionaire? Of the film’s two main actors, Chiwetel Ejiofor was a newcomer to film, while Audrey Tautou had become a major star in the previous year when she starred in the very successful French film Amelie. Of the main actors in the cast-list, Ejiofor, Benedict Wong (Guo Yi) and Sophie Okonedo (Juliette) were all in fact born in Britain, though their parents were not. 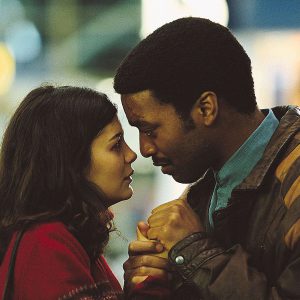